When cloud computing first hit the scene, it promised a world where enterprises could ‘plug in’ to the cloud and consume what they needed, when they needed it, in a simple metered fashion with no concern for the underlying hardware. A lot of sales pitches promised unheard-of simplicity and transparency, but was that actually the case?

Today, we’ll explore some of those selling points, and look at how fully they’ve come to fruition.

Weighing the Benefits of Private Cloud 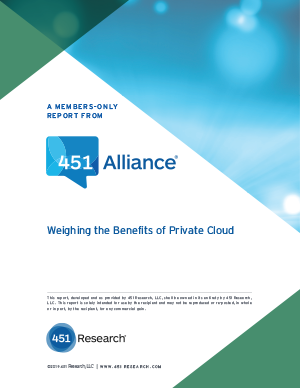 When cloud first hit the scene, it was expected that it could easily be integrated with virtual machines and other services, giving it the flexibility to scale up and down based on fluctuating demand.

If that had been the case, a small assortment of virtual machines would have been enough, and cloud could have been scaled ‘vertically’ by buying more as needed.

However, many applications – particularly those that date back to the pre-cloud era – require huge database support, or processing engines that are so large they can only scale ‘horizontally.’

‘The hardware is abstracted.’

With the assumption of easy scalability, cloud was supposed to reduce the need for a wide variety of different virtual machines.

Instead, the opposite happened.

Since 2015, the range of virtual machine sizes available from AWS, Google and Microsoft has quadrupled, from 98 to 409. This points to the fact that the hardware hasn’t been abstracted, and developers still need to choose the best hardware – in the form of the most appropriate virtual machine – for the job.

Centralization of cloud infrastructure was initially a selling point. Now, diverse location of infrastructure matters more than ever. Varying political climates and compliance requirements worldwide have led to organizations spreading their data out across a variety of locales where they do business.

For virtual machines, the standard metric is a fixed size per hour, and for storage it is GB per month. But for serverless, load balancers, database and others, there are multiple metrics being billed.

Crucially, these metrics vary between providers, making vendor-to-vendor comparison quite the chore for the consumer.

This problem is only getting worse: in 2015, there were 98 cloud services offered by AWS, Google and Microsoft for cloud buyers to understand and consider for their requirements. Today there are almost triple that amount (288).

What does it all mean?

The fact that all these maxims haven’t panned out isn’t of huge concern.

Instead, it shows that consumers are adopting these new technologies at their own pace and in their own way. Service providers are simply stepping up to the challenge and giving organizations what they want. This is creating complexity in the form of new services, pricing models and locations, but it is also making some things simpler: product comparisons are now at least possible, and pricing is certainly more transparent than it once was.

Want the inside scoop on cloud computing trends?

Join the 451 Alliance for exclusive research content. Do I qualify?