Enterprise IoT budgets are healthy and growing, according to 451 Alliance research. Average budget increases have been in double figures for each of the past three years. For enterprises that measure it, return on investment (ROI) for IoT is overwhelmingly positive.

However, not all enterprises track it. Why not, and what can vendors do to help? 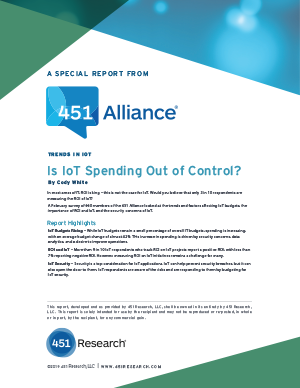 Measuring enterprise ROI for IoT technology can be a challenge, according to 451 Research Senior Analyst Rich Karpinski, in the 451 Alliance webinar So Who’s Deploying IoT, Anyway?

Seven out of 10 respondents (71%) in our 451 Alliance survey said they currently measure IoT ROI. Of those who measure it, 93% said their IoT ROI is at least somewhat positive.

So why don’t the remaining 29% of respondents measure IoT?

Well, for one thing, nearly half of survey respondents said measuring ROI is difficult. In a live webinar poll, 43% agreed that it’s harder to measure ROI of IoT projects compared with other types of IT projects.

Of those who measure it, 93% said their IoT ROI is at least somewhat positive.

Karpinski noted that there are a lot of moving parts on the deployment side that are challenging to measure – ranging from sensors to connectivity, storage, applications, analytics and infrastructure.

Close to half of the survey respondents that do not measure ROI for IoT (45%) said they are not required to do so.

For 23% of them, ROI does not matter and they would deploy IoT regardless – these are not 451 Research “best practices.”

How can IoT vendors help?

We asked the survey participants about the kinds of assistance they need from their vendors to successfully deploy new IoT initiatives. Not surprisingly, more than half of the respondents (55%) said they need professional services for project deployment/implementation. In addition, 42% said they need help defining metrics to define project success.

View all posts by Rob Ebbin